Congratulations to Sensei Julio Arce (TSMA Bayside) on his recent promotion to 3rd degree black belt!  Opening Words From Shihan Bryan Gotthoffer Sensei Julio Arce is more than an instructor. He’s a professional athlete in the ring, a student on the mat, a training partner, but more importantly he’s a good person. Scratch that. He’s one […] 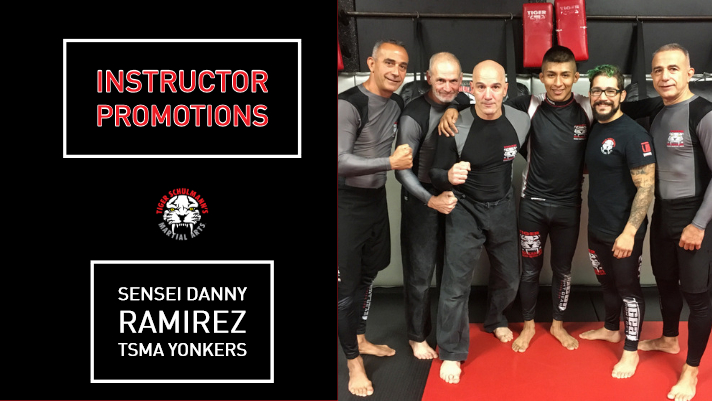 Congratulations to Joshu Danny Ramirez (TSMA Yonkers) on his recent promotion to Sensei!  Opening Thoughts From Shihan Tirelli Observing the evolution from student to sensei is a very special experience. When Danny came to the school, he was a tough kid from good family in a not-so-nice neighborhood. As a student, he was meticulous, hard working […]

Martial Arts For Kids: How To Prepare For The First Class With back to school season approaching, its important to find a program that can improve both self confidence and physical fitness for kids. martial arts is a great choice 100 percent of the time. Not only can it increase an child’s strength, flexibility and stamina, but it can also lead to more empowering thoughts that, in turn, encourage one […] Congratulations to Mike Trizano for earning his promotion to Sensei!  Mike’s Start Mike “The Lone Wolf” Trizano started his training with Tiger Schulmann’s in Summer of 2009. At 17, he always a decent athlete who loved football and baseball, but his Dad said he didn’t have faith in his discipline and reluctantly signed him up. […] Congratulations to Sensei Levy & Good on earning their promotion!  The Story of Nissam Nissim Levy was a kid on the wrong path. He would get into fights at school, small trouble in the neighborhood  and his future wasn’t looking good. His reputation preceded him. He was a tough kid, but a good kid; everyone […] Congratulations to Matt Castillo on his promotion to Sensei!  Sensei’s Beginning Matt is a great example of growth within the Tiger Schulmann’s family. He originally came in to spar on weekends,  with little boxing experience and quickly saw that TSMA was a perfect fit for him.  At one point he in his life he was […]

Fight Like a Girl – A Short Film by Jillian Rivera “Fight Like a Girl” is a short 5-minute documentary about how several women in the organization use martial arts as a form of empowerment and as an escape from sexual assault. These women include Sensei Munah Holland (TSMA North Plainfield), Nicole Tuminski (TSMA Englewood), Naima El Jaouhari (TSMA Chelsea), Lauren Fish (TSMA New Windsor), Sophia […] By Bob Guccione Jr. – Muscle & Fitness Magazine – January 2017 Edition Not just the name of a school, TIGER SCHULMANN is real. And he’s been schooling the world in martial arts since he was 9 years old. When Daniel Schulmann was 9 years old, his older brother was badly beaten by two bullies and had to […]