If the UFC or Bellator are looking for bantamweight prospects to add to their roster, here are the 5 most big show ready 135ers in the world….

1. Aljamain Sterling – Sterling is the top bantamweight prospect in the world. In my opinion, he is a can’t miss guy. He will fight in August and then he should be UFC ready.

2. Sirwan Kakai – When the UFC went to Sweden, I was blown away that they did not sign Sirwan Kakai for that card. There is no doubt he is on the radar. I would expect him to be strongly looked at in the near future.

4. Josh Hill – Hill may not quite be ready for the UFC. However, it could be a great place for him to develop. In my opnion he is one win away from a trip to the UFC. He will fight John Fraser on August 25th. If Hill wins, he will be the best bantamweight prospect in Canada and will probably be UFC or Bellator bound.

5. Kyoji Horiguchi – I am not sure how well he would do in the UFC, but he has potential to be a different type of Japanese fighter. He trains with Kid Yamamoto. He has power in his hands. He could be a guy seriously on the UFC radar.

Find a retailer that carries these cards near you – http://www.topps.com/retailers 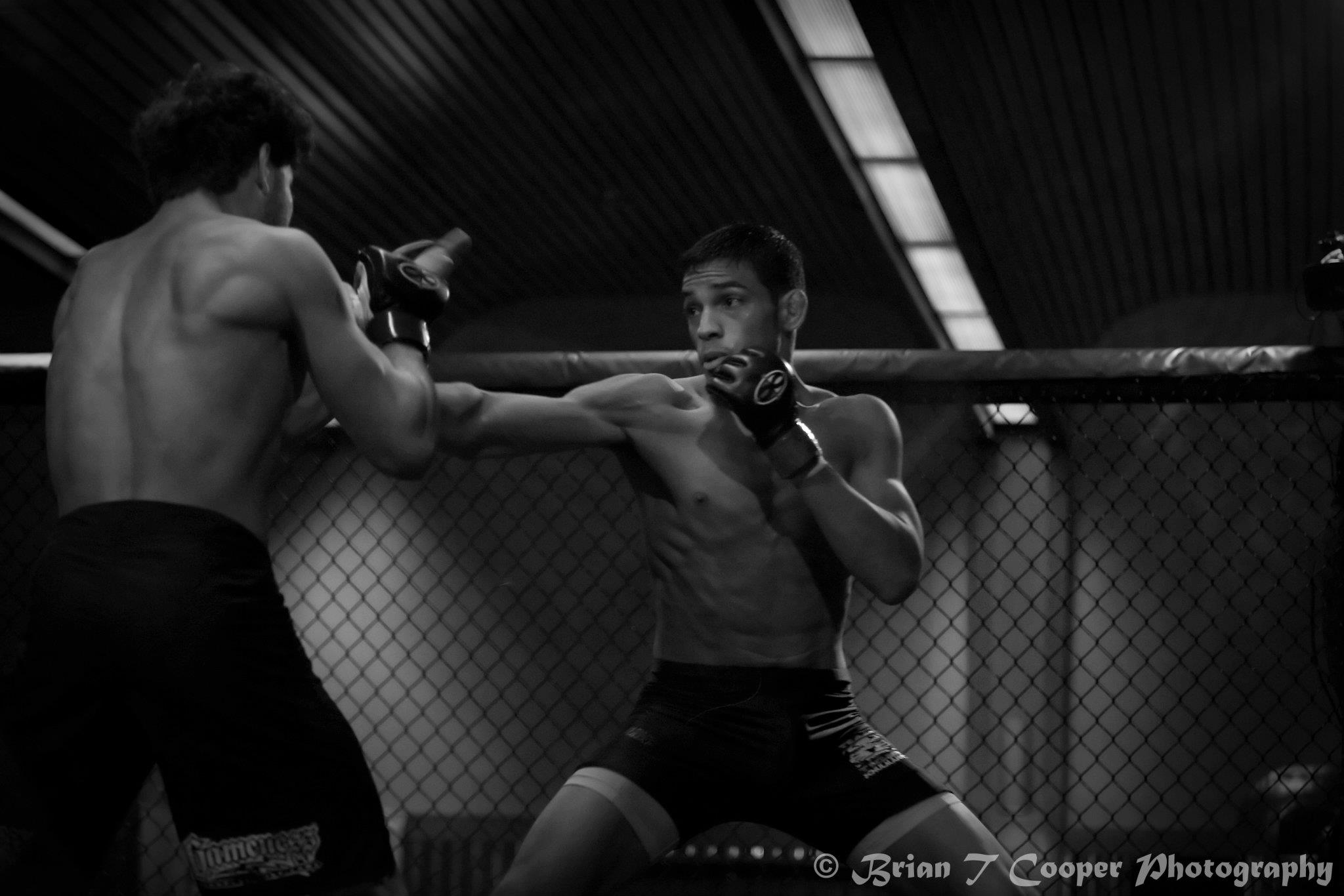 It was a fighting fundraiser at The W Hotel in Hoboken Monday.  Team TSMMA is always up for a fundraiser and fighting is our specialty so what better way to start the week than by lending a few jabs!

Regman would be up first as the hard punching amateur faced off with Umaran Siddiqui.  Regman would control the ring from the outset. He used his slick movement to keep his opponent from getting set while landing powerful shots.  The tactic has worked superbly for Regman in amateur MMA, unfortunately the rules of amateur boxing give no favor to power or ring control.  Siddique landed a couple more slapping punches and somehow pulled out a victory after being beaten up for three rounds.

Jenna Serio stepped through the ropes next and wasted no time changing the tide for Team Tiger Schulmann’s. With her chin tucked tightly to your chest, Serio stalked Elizabeth Keller around the ring. She cut corners and kept constant pressure, throwing great combinations to the body and head. Serio dominated all 6 minutes of the 3 round fight, leaving her opponent the picture of defeat. Serio would win  a unanimous decision.

Looking to build on the momentum was Joshu Craig Alexander.

He would square off with a fellow Irishman, Steve Connolly, in the fight of the night. Alexander threw his triple jab 2 seconds into the fight and didn’t stop throwing combinations for the next 5:58. It cant be a fight of the night without a battle from the opponent and that’s exactly what he got. The two spent much of the fight in close quarters trading body shots and uppercuts. It was Alexander who would finish every exchange and cut off the ring to establish the right distance on his taller opponent. Alexander would win a second decision for Team TSMMA.

Mike Trizano would wrap things up for the night. The matchup pitted two extremely technical fighters with both showing great ring generalship. Trizano and Jahi Joiner had slick foot and head movement with neither being able to establish distance without  the other moving out of range. The fight became a battle of jabs with Joiner’s not measuring up. As the fight went on, Trizano was able to follow up his jab with a few solid right hands and at one point landed a left hook that may have ended the fight if not for headgear and 16 oz gloves. The TSMMA crowd would applaude Trizano’s effort as her brought a victorious close to a 3-1 evening.

Congratulations to all four competitors and stay tuned to TSK blog as the competition heat up throughout the rest of the summer.

Ian McCall is looking for a rebound, and he has someone in mind.

After a disappointing loss to Demetrious Johnson in their rematch this past month in Florida, McCall has been bummed. But what better way to put a smile back on his face, he figures, than getting his hand raised again in the octagon?

“I’ve been pissed off and depressed about losing (to Johnson),” McCall recently told MMAjunkie.com Radio (www.mmajunkie.com/radio). “I want to be happy again.”

The key to potential happiness for McCall (11-3-1 MMA, 0-1-1 UFC), he figures, just might be Louis Gaudinot (6-2 MMA, 1-1 UFC). Gaudinot recently told MMAjunkie.com Radio he’d like to fight McCall, and McCall responded in kind.

“I would love that fight,” McCall said. “I definitely thought he sucked to begin with, and I’m taking that back. At 135 (pounds), I thought he looked horrible. Seeing him at 125, he looks great. He looks a lot better. That would definitely be a fight I’d like to take.”

McCall fought to a draw with Johnson in March – a fight that should have gone to a fourth sudden-victory round but didn’t thanks to a commission error. He said the rematch in June came down to him having issues with his weight cut and being off during the fight.

“It came down to my fault,” McCall said. “Obviously, no one likes blaming anyone else. I screwed up. My diet didn’t go like I should’ve, and I ended up cutting 18-and-a-half pounds. I was flat, and I didn’t fight like I should have.”

McCall said he hopes Johnson beats Joseph Benavidez in their flyweight title fight, which is slated for the main event of UFC 152 in September. That way, he can get another crack at “Mighty Mouse” – even though he doesn’t see it happening and instead sees Benavidez getting the belt around his waist.

But until then, he’ll be campaigning to get a fight – and perhaps quickly. The Californian said he would love to find a spot on UFC on FOX 4, which takes place Aug. 4 at Staples Center in Los Angeles.

Click image below for Event Details – Please note, no tickets will be sold at the door

Please note that Shane Burgos (TSMMA Woodbury) will no longer be competing tonight as originally scheduled. Also, Carl La Piera is not apart of Team Tiger Schulmann, this is a misprint.

Arce and Holland Knockout the Competition at Matrix Fights MMA

Arce and Holland Knockout the Competition at Matrix Fights MMA

It was a great night for TSMMA at Matrix Fights in Philadelphia. Stepping into the cage first was TSMMA Bayside’s own Joshu Julio Arce. Determined and ready for war, he stared down his opponent Kenneth Nagle from across the cage. He patiently paced back and forth waiting for the fight to begin.

When the bell sounded for the start of the round both fighters met in the center to feel each other out. Arce wasted no time putting his lightning fast jab to work. Little did Nagle know this would be the beginning of the end.

With textbook boxing and smooth footwork, Arce used his jab to distract Nagle before he followed up with a straight left hand down the middle that staggered him. Seeing that his opponent was hurt Arce pressed forward and threw another left hand that landed clean on Nagle’s jaw, knocking the mouthguard out of his mouth, dropping him to the floor and ending the fight unscathed and barely having broken a sweat.

Joshu Julio Arce wins his pro MMA debut by way of knockout at 1 minute and 46 seconds into the 1st round!

Holland has won four straight fights since suffering her lone career defeat in December 2010. She has finished three opponents with strikes, including tonight’s one-punch knockout of Damm. Despite a solid first round against Holland, Damm remains winless in her past four fights in the United States.

Holland (5-1-0) showcased her power early in the fight and dropped Damm (17-7-0) with a right hook. Damm recovered and battled back to her feet. She was able to take Holland’s back in search of a rear-naked choke and managed to get Holland down to the mat. From there, Damm remained active in pursuit of submissions. She tried for a heel hook and Holland displayed her improving ground game by escaping before the end of the round.

While Damm appeared to hold an edge in round one, the second stanza was a much different story. Holland kept the fight on the feet and picked Damm apart with punches before finishing her off with a crushing right hand midway through the round. Damm collapsed to the mat against the cage and the bout was waved off, giving Holland a big victory. The Team Tiger Schulman prospect remains one of the most powerful strikers in the 125-pound women’s division.