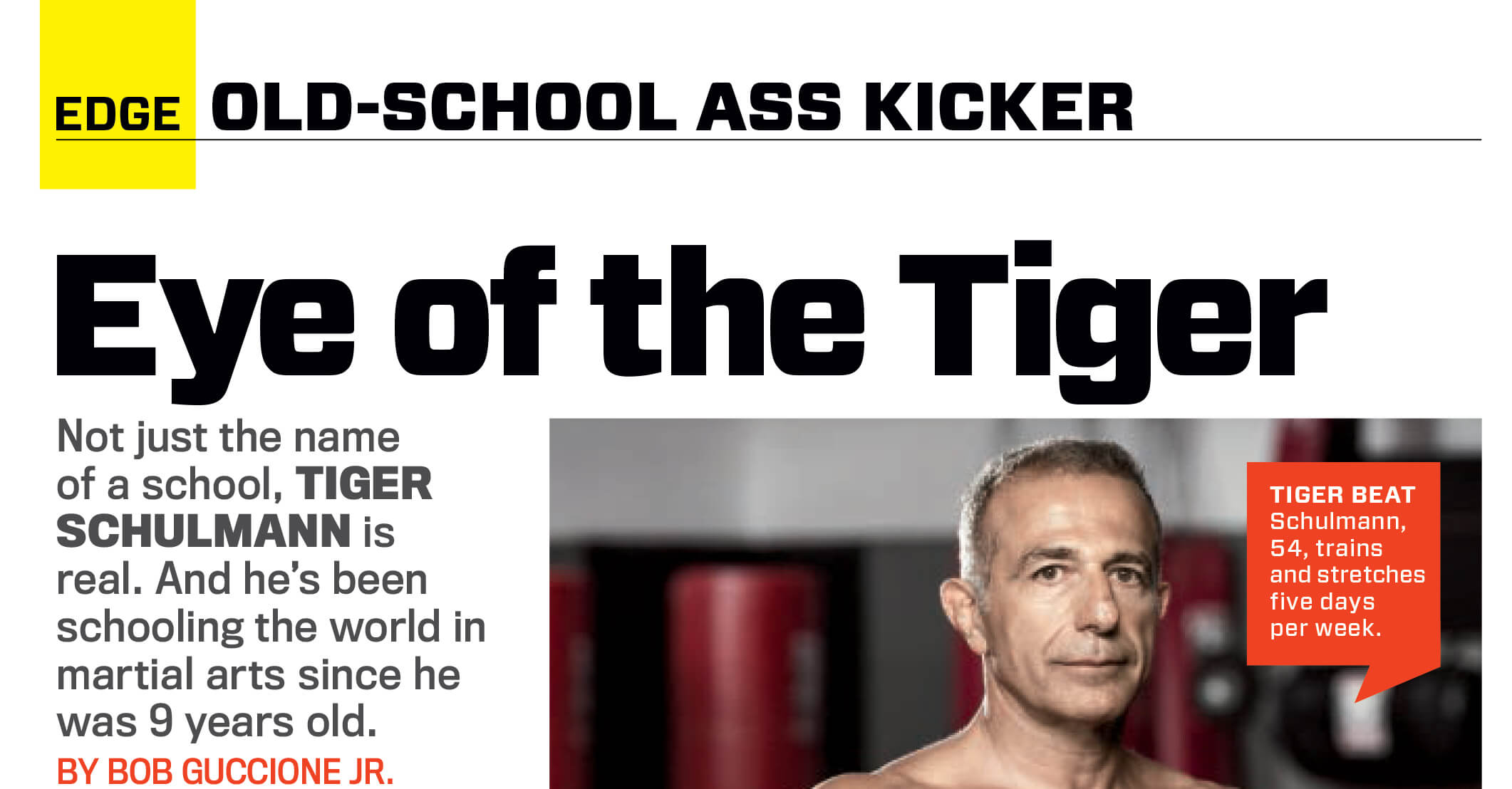 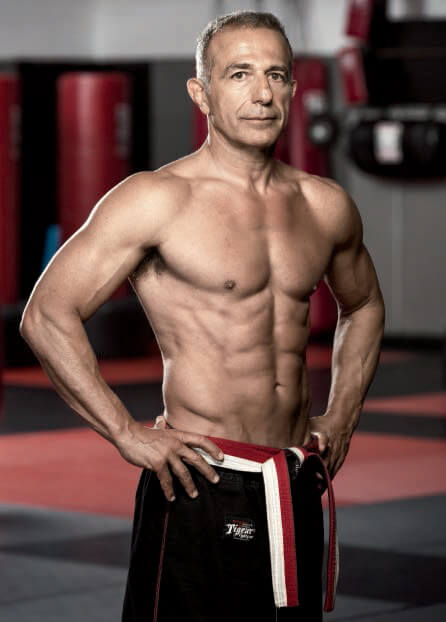 Not just the name of a school, TIGER SCHULMANN is real. And he’s been schooling the world in martial arts since he was 9 years old.

When Daniel Schulmann was 9 years old, his older brother was badly beaten by two bullies and had to crawl home with a broken leg.

The next day their father registered both boys in a Kyokushin karate school, in Spring Valley, NY. Daniel was a natural, and although  his older brother gave it up, Daniel excelled. He was awarded a black belt by the time he was 12 and perhaps more providentially, a nickname, Tiger, from his sensei, for being so ferocious. When the family moved to Quakertown, PA, Daniel had to travel more than three hours to Fairfield, CT, to train with his master, Shigeru Oyama (who’s known for successfully completing the 100-man kumite, defeating 100 consecutive black belt opponents in full-contact matches). The journey took him through New York City, where he would walk through then-seedy Times Square and watch previews of Bruce Lee movies on small screens outside cinemas playing the films.

In 1979, at just 17 and 135 pounds, he represented the USA at the World Open Karate Championships in Tokyo. He won his first fight by KO, but lost the next by decision. There were no weight classes at the tournament, and he was the youngest and lightest competitor.

In total, he fought more than 100 opponents in competition, winning most, and was the North American Mas Oyama Full-Contact Karate champion for six straight years, from 1979 to 1984, when he retired. At 22 years old, Schulmann opened the first of what has become a chain of Tiger Schulmann Martial Arts schools, and to this day, at 54, he teaches five days a week, including training all the schools’ instructors. Originally, he taught just traditional karate, but like every businessman, Schulmann realized he needed to branch out his offerings.

“After I watched the first UFC, I stopped teaching forms, weapons, wood breaking, all these things that are unnecessary,” he says. “I thought, ‘Why are we doing all these things? Why are the UFC guys winning?’ Because what they were practicing was reality, what happened in a real fight.” It transformed his thinking to train in things that actually work. “In six months, I can take a kid who’s getting bullied and make sure—by training him in real fight situations—he can have enough confidence in himself to stand up and not get bullied anymore.” He doesn’t believe in one martial art being more special than another.

“I believe it’s the person who does the art form. When you look at the overall picture of MMA, what are the best hands you can learn? It’s not kung fu, and it’s not karate, it’s boxing. When it comes to kicking, Muay Thai is the best for low kicks, to take away someone’s foundation. When it comes to high kicks, it’s a combination of karate, taekwondo. When it comes to takedowns or to prevent takedowns, I think freestyle wrestling and Greco-Roman style wrestling, which is upper body only, are the best for a real street fight. When you get to the ground, it’s pretty obvious that Brazilian jiu-jitsu has to win. In Roman and Greek times, they fought to the death, and had strangleholds, like jiu-jitsu does.”

Whatever the form or activity, to achieve anything in life, Schulmann has a simple belief. “You have to have a nonquitting spirit and self discipline, which is the thing I teach the most. If martial arts is going to teach you anything it is how to be comfortable in an uncomfortable situation, and to not give up.” One such situation is being in a street fight. “You have to know what it’s like to get hit. You have instructors out there who never had a real fight. They say, ‘Just hit a guy in the groin, and he’ll go down.’ Well, in a fight, when the adrenaline is pumping, that doesn’t always happen.” FIGHT CUB Tiger, sporting a mustache at 17, with his younger brother Ron, 15, when he first started teaching martial arts to his friends at his parents’ motel in Pennsylvania.

Instructors at Schulmann’s schools also offer guidance regarding diet and nutrition. “We have a program at Tiger Schulmann called EAT (Eat And Train) for life that was created to teach students how to adopt a healthy lifestyle that includes proper nutrition and consistent training. I live that program every day of my life.“If you’re eating lousy and don’t have energy, there’s a reason. If you’re eating properly, you’re going to have all kinds of energy to train.

“The only way you’re going to get in shape is if you enjoy what you’re doing. In my schools, people enjoy going because they are learning an art, they’re perfecting it, and getting in shape.” And if you’re wondering, he never came across the bullies who beat up his brother. Lucky guys.