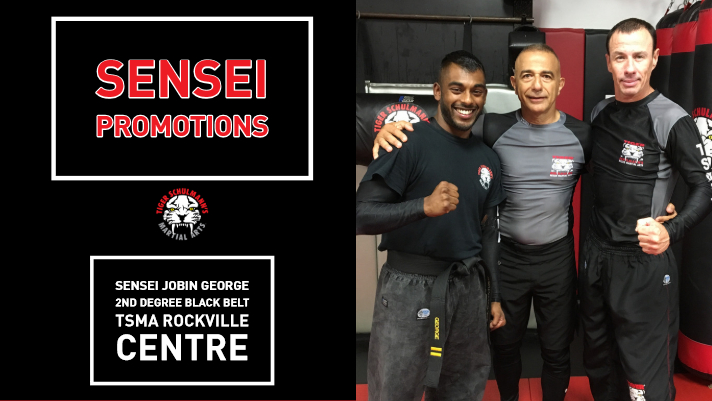 Jobin George entered the doors of Tiger Schulmann’s in October of 2001. At ten years old, he was an extremely shy and had little to no discipline when it came to fitness. At that time, enrolling in classes was all done by private lessons and the last thing a Sensei wanted to do is is check on someone’s push-ups to see how many they can do. On his first day, Jobin attempted to do a push-up and was not able to. Immediately his eyes welted up in tears. Sensei Curran made Jobin look him in the eyes, as he does for all students and said, “That is the last time that you cry for not being able to do something. I believe in you! You are safe here. We’re gonna work together, and together will make you into the champion you are meant to be.”

At that same first lesson there was another promise made, this wasn’t the declaration Sense Curran made to Jobin, but a vow made to Jobin’s father. Sensei assured his Dad that he brought him to the right place. He explained to him that martial arts will not only build Jobin’s strength and discipline but more importantly, it will build character and self-esteem, and that through their work together – on and off the mat Jobin would be empowered to do his best in all that he does. He gave his word that he would come through for him as his coach, and that one day his son would say “I feel amazing, I believe in myself. There is nothing I cannot do!”  After six months, Sensei Curran saw tears in Jobin’s eyes – but these were not the same type of tears. When I approached him, he said to “I’m not crying because I’m giving up – I’m crying because I’m done quitting.”

From that day Sensei knew Jobin’s foundation was laid and he understood what being a martial artist is all about. Fast forward a few years through Jobin’s teenage years, Jobin worked hard and pushed himself to morph from student to teacher. He went for mentee to mentor and his roles shifted to becoming the person to pay it forward and help all the new children and kids coming in do push-ups or anything else they needed to do extra on the mat. Eventually Jobin began working part time in the school – teaching private lessons and always giving extra help to the kids that needed it. His on-the-mat techniques were complimented greatly by his off-the-mat attitude.  Jobin developed great relationships in the lobby with students andy parents. By the time this person was 18 years old, he was completely transformed. He was lean, ripped, strong, a straight-A student, and beyond dedicated in helping anyone in the school accomplish their goals. “I remember having a conversation with Sensei Bosyk years back telling him that the way I turn my instructors out is by wanting them to have such good morals, values, ethics, and standards. That if I had a daughter then they would become the type of person I would want her to marry. Jobin is that person to me. He is family! He has been there for me through it all. Whether he was sitting next to me at the hospital, driving me to Manhattan every week throughout my transplant without a complaint, as a buddy on the hike trails or kayaking, as a sparring partner. I love him dearly, and it is my honor to give him his second degree black belt!”