We offer classes for kids and adults ages 3 to 99. Here’s a look at some of the programs we offer:

Our programs are about more than just getting in shape. We help shy kids become more confident. We work with children with ADD as an alternative to medication. We empower women in abusive relationships to stand up for themselves.

The staff at Tiger Schulmann’s in Englewood, NJ also gets involved with the local community. We bring our bully prevention program to area schools, and we offer a WomenSafe Seminar at the local library. During the summer, we participate in local festivals, street fairs and parades. We even teach kids classes at nearby recreation centers.

For more information about Tiger Schulmann’s and where you can find a location near you, please give us a call at (800) 528-4437 today. Also, don’t forget to connect with us on social media! We’re LIVE on Facebook, Twitter, Google+ and YouTube, and update our pages regularly with the latest Tiger Schulmann’s news and MMA tips! 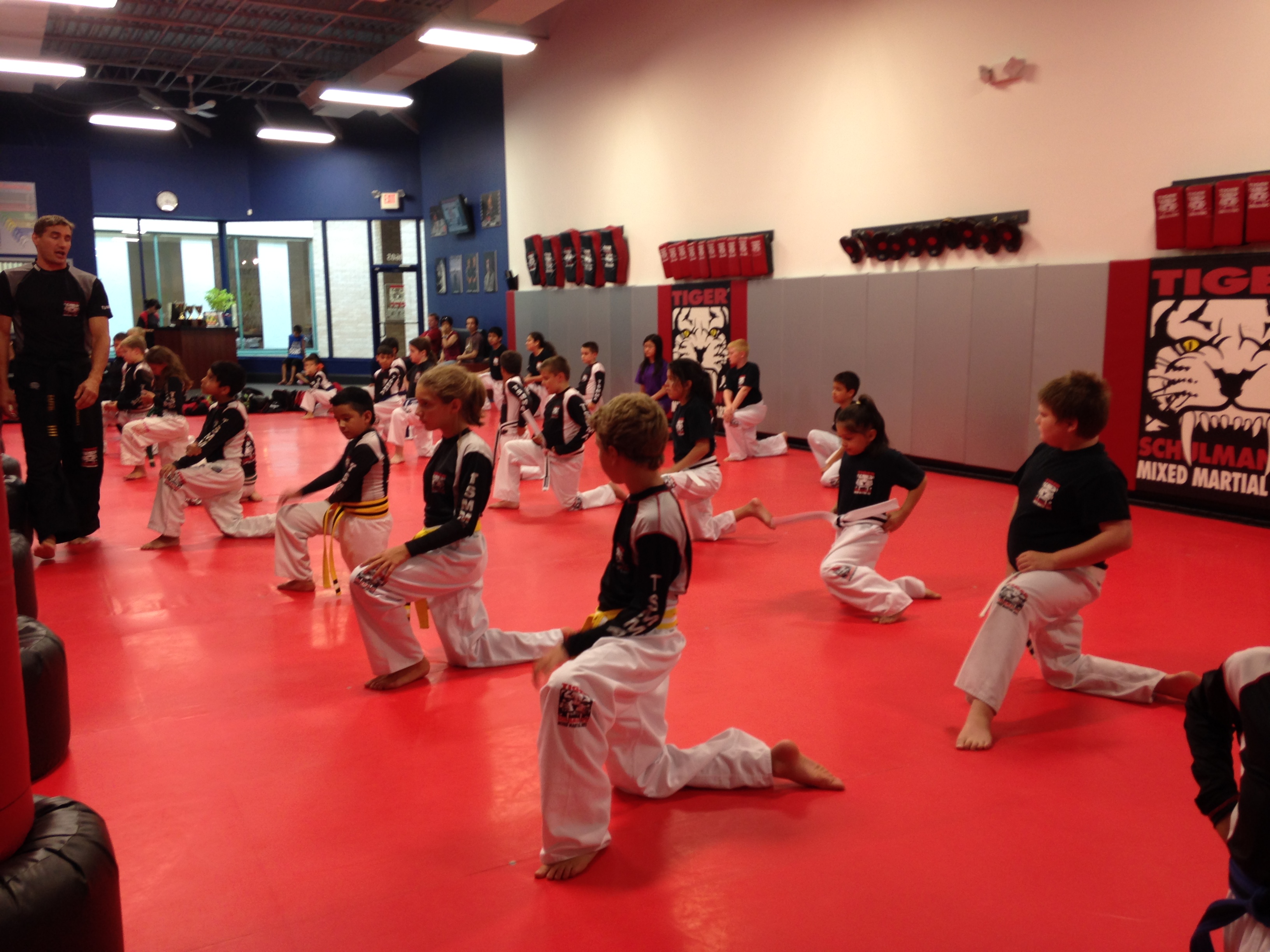 Have you ever wondered if Mixed Martial Arts was more than just a good Cardio workout?   How much of a “Non Quitting Spirit” is really carried over into a students every day life?   Is there improvement on a social emotional level or is Martial Arts more for the body and not the mind? At Tiger Schulmann’s Englewood, it was discovered that the higher the belt was in either adult or child the higher the level of confidence.  Belts represent how long a student has been attending classes and also the progression of the skill.  It was discovered that when a student attends class consistently for two years or more they are more confident not only in their skills, but in their ability to protect themselves.

Martial Arts differs from team and collegiate sports in that conventional sports focus on group efforts, while Martial Arts is designed for each students’s individual progress.  As a students individual skills increase, so does their belief in themselves. Every Kickboxing Class ends with a good Stretch

Talking with parents as the children are in class,it was discovered that children with yellow belts or higher seemed to have less incidences of bullying or issues with confidence.  Adults in class speak of their determination an self discipline.

This is in large part to Sensei Klein’s group discussions on the importance of never giving up, standing up for yourself, and in the belief that you are the best for being yourself.

In closing, one must believe that longevity in the martial arts does have a positive impact in the emotional well being of a child.

Hyper Activity, ADHD, How Schools are Harming Our Sons and MMA Can Help! When My son entered the school system I was broached with the topic that I should have him tested for ADHD.   It was explained to me that he fidgeted, that he hummed, and that while he could complete all of his work and was exceptionally bright he had problems focusing.   As a mother I was distraught  in dismay that I was being told this about my child.

I took my personal feelings out of the situation, and began to do my research. I looked at the bigger picture and realized that my son was only 4 years old and in a school that did not allow children to run at recess for fear of lawsuits. The children only had gym once a week and this gym class did not always occur. How was my energetic child supposed to sit for 8 hours a day without a physical release? I spoke with my pediatrician who told me that ADHD should not be diagnosed before the age of 7.

I also began reading Spark: The Revolutionary New Science of Exercise and the Brain written by John J. Ratey. The book gives specific examples about how exercise correlates to brain function. Studies were done with failing high school students and it became evident that by having children run laps and perform physical exercise before schooling every day their grades improved.

The Trouble With Boys: A Surprise Report Card on Our Sons, Their Problems at School, and what parents and educators must do by Peg Tyre was another helpful read. It looks at the alarming drop out rate of boys in school as a result of the immense focus on academics and the banning of recess at a time when boys are learning how to sit still.   It talked about failing test scores as a result of the low emphasis of exercise confounded with rising drop out rates.

I took this information to heart and realized that not only was I not at the right school with my son, but he needed more exercise.   I enrolled him into Mixed Martial Arts class and he was allowed physical release as well as learning discipline and focus.   Mixed Martial Arts helps him redirect and refocus all of that energy into skill, and Sensei Klein works hard with him redirecting his attention span and constantly changing his curriculum to help him focus.   He concentrates on listening skills speaking to the children on the importance of ear focus and eye focus.

Research done by “live strong”  and “baby center” shows that Mixed Martial Arts and Karate can greatly improve a child’s ability to focus and while some children may still need medication for ADHD and ADD children, they still show improvement with Karate and Martial Arts.

My son just finished his first year in Kindergarten. He takes 4 hours a week with Sensei Klein and is at a school that values physical activity.  Yes, he is still a ball of energy, but he has done well this year both academically and behaviorally.  His teacher’s embrace who he is.   ADHD, Hyperactivity, and children being children can be very confusing… take some time and do your research.   It can be overwhelming but worth it!

Watch this video, to learn about our Children  Program